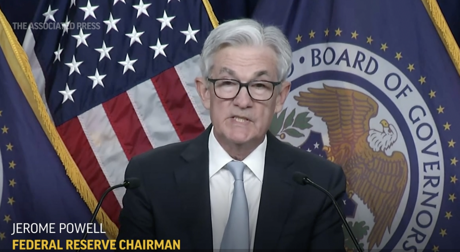 All year long the Federal Reserve has been in the news. Inflation had become enemy number one and they were going to do everything in their power to tamp down out-of-control inflation. Prices of goods, services, food, and energy were climbing at an unhealthy rate. Home values had soared by over 40% in just two years.

In June, after delivering his prepared press conference remarks, Jerome Powell was asked about their outlook for the housing market. He stated that housing needed “a bit of a reset.” During the September press conference, a reporter asked for him to elaborate on what he meant by a housing “reset.” He did just that:

In economic terms, a correction typically means that home values drop between 10% to 20% from the peak. That peak occurred in May and prices have been on the decline in Southern California ever since. The issue is that mortgage rates have climbed at an unprecedented pace this year in response to all the Fed’s actions and statements, climbing from 3.22% at the start of January to 7.08% today, according to Freddie Mac’s Primary Mortgage Market Survey®. In the over 51 years in conducting the survey, mortgage rates have never climbed this much in a year, surpassing the prior record annual gain in 1981.

Powell just announced this afternoon another three-quarters of a point rate hike. 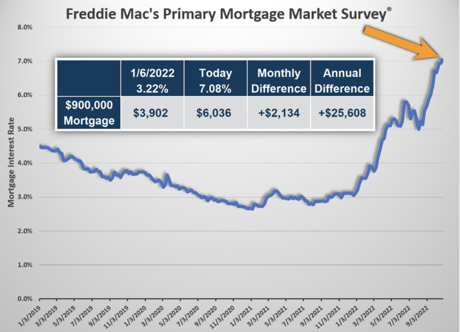 Demand, a snapshot of the number of new escrows over the prior month, has dropped to levels last seen during the initial pandemic lockdowns of April 2020, reminiscent of the start of the Great Recession. Today’s demand is at 1,270 pending sales, 48% less than last year’s 2,429 hot October reading. The 3-year average prior to the pandemic (2017 to 2019) was 2,180, an astonishing 72% more than today. 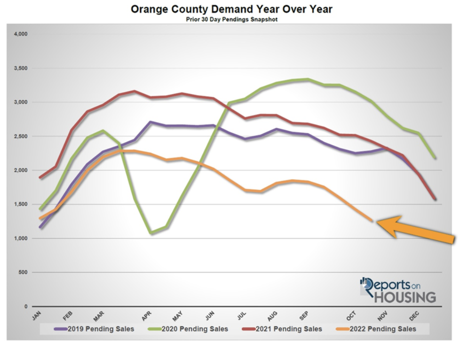 The supply of homes has increased dramatically after starting the year at record low levels, increasing from 954 homes on January 1st to 3,677 homes today, a 285% rise. It is up 97% compared to last year at this time but is well off the 3-year pre-pandemic average of 6,010 homes for this time of year. The inventory should have surpassed levels last seen in 2019, but it fell well short due to a lack of homeowners placing their homes on the market. So far this year there have been 6,198 missing FOR-SALE signs compared to the 3-year average number of homes placed on the market prior to COVID, 19% fewer. Homeowners are hunkering down and opting to stay put as they enjoy unbelievably low fixed mortgage payments. According to the Federal Housing Finance Agency, 71% of all Californians with a mortgage have a rate of 4% or lower, far below today’s 7.08% height.

Even though the supply of homes remains muted, uncharacteristically weak demand has resulted in the Expected Market Time, the amount of time between pounding in the FOR-SALE sign to opening escrow, climbing from a low of 19 days at the start of March to 87 days today.

A market time of 87 days is not even close to the start of the Great Recession when it eclipsed 365 days back in 2007, but the lack of affordability has reached a crisis level and values are slowly declining regardless of the lack of available homes. Today’s buyers are sophisticated and cautious in their approach to the housing market. They are unwilling to stretch and will not overpay for a home. It all boils down to value and they will patiently wait for the right home to come along.

For sellers, it is imperative to recognize that the Federal Reserve’s housing “reset” has arrived. Be prepared for mortgage rates to remain elevated until inflation moves in the right direction. Until then, demand will remain sluggish, market times will grow longer, and home prices will slowly and methodically decline.

Rates are going to continue to increase, with the hopes that home prices will decrease.

Buyers need to understand that their home values may go down if they buy right now, but that they will eventually flatten and increase again over time (perhaps 5 years or so.) Locking in at a 7% rate now might actually seem like a bargain if rates are at 9% next spring. Buyers should also check with their mortgage lenders to see if they have any programs that will allow them to “lock and shop” so that they don’t have to succumb to the ever-increasing rates. Always remember, homeownership is historically a great hedge against inflation.

Sellers need to understand that buyers can’t afford what they could even just last month. Consider all offers and know that comparable properties and thus other offers one month from now will likely be less than those offers received today.